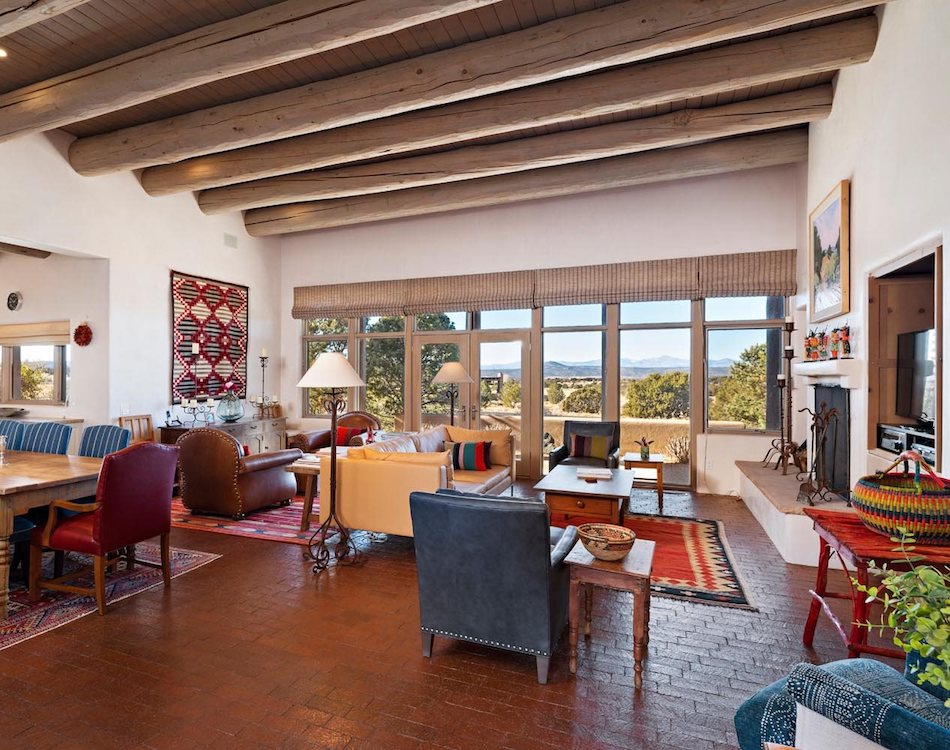 Santa Fe is a city with a spectacular natural setting, a vibrant arts scene, unique cuisine—and its own architectural profile.

Homebuyers may be familiar with terms like camino, but do you know the difference between a nicho and a viga?

Never fear—our handy reference will put you in the know as you look for homes for sale in Santa Fe. It’s been said that we’re better at seeing subtle differences in color if we know the name of each shade, and the same goes for architecture.

This refers to a traditional man-made ditch used for irrigation that is found throughout the State and dates back to the Spaniards.

Clay homes are made from adobe, a material of mud and straw. The recipe for adobe varies depending on region and it’s really determined by whatever’s handy. Today, adobe is usually reinforced with steel rebar and cement and finished with stucco or another sealant so that an adobe-style home might last for centuries.

These are the cupboards you see built directly into adobe-style walls.

A dry riverbed that sometimes fills with water that’s usually called a ‘wash’ in neighboring states.

Bancos are a unique feature of Southwestern architecture. These low benches are built right into the walls for seats. Typically adobe with a plaster sealant.

When you look at adobe homes you’ll notice that the ones with flat roofs have little square holes in the surface near the top. These are canales, roof spouts that carry water off the roof to keep it from collapsing or becoming waterlogged.

The flat stone paving material you see on patios and walkways for adobe-style homes.

Spanish for an estate. Nowadays these usually comprise of larger homes with land.

Historic Styles Ordinance refers to the ordinance prohibiting the building of non-pueblo-style structures in the historic districts. If you plan on doing any development in those areas, you’ll want to read up on the ordinance.

An outdoor wood-burning oven built of adobe bricks. They are shaped like beehives and used for cooking.

In Puebloan culture, a kiva is a room used for spiritual ceremonies. In southwestern home design, the term refers to a round fireplace.

A nicho is a shelf-like opening carved into adobe walls to display pottery, store firewood, and so on.

A small plaza or gathering area.

Patios and outdoor porches with fixed roofs and post supports.

The sala refers to the living room or the parlor in Santa Fe homes.

When you see an adobe-style home, you’re probably looking at a Spanish Pueblo Revival-style building. This was a style that became popular in the 1920s and 1930s when developers and architects felt that Santa Fe should have its own distinctive style, embracing its pueblo roots. These homes are usually built with an emphasis on visible roof beams and smoothed corners.

The cement-based finish you see on the outside of adobe-style houses.

When you see those beautiful countertops covered in hand-decorated tiles, those are Talavera tiles.

The round wooden beams you see in adobe-style homes. A traditional adobe home would usually be roofed with a few of these supporting a series of adobe bricks. Nowadays roofing is generally built out of something sturdier than adobe bricks, but it just doesn’t feel like an adobe home without the viga support beams. The scroll-shaped wood bracket that supports the viga, by the way, is called a corbel, and the packed-mud covering on traditional adobe viga roofs is called torta.

You can see Southwestern-style architecture from California to Texas, but Santa Fe is the heart of the movement. Here you’ll see Pueblo Revival homes dating back to the 1920s alongside ancient buildings like the Palace of Governors, built by the Spanish all the way back in 1610, and newer buildings combining modern materials and building techniques with classic design.

And now that you know the language, you’ll have an eye for it.