What You
Need to
Know When
Moving to
Santa Fe 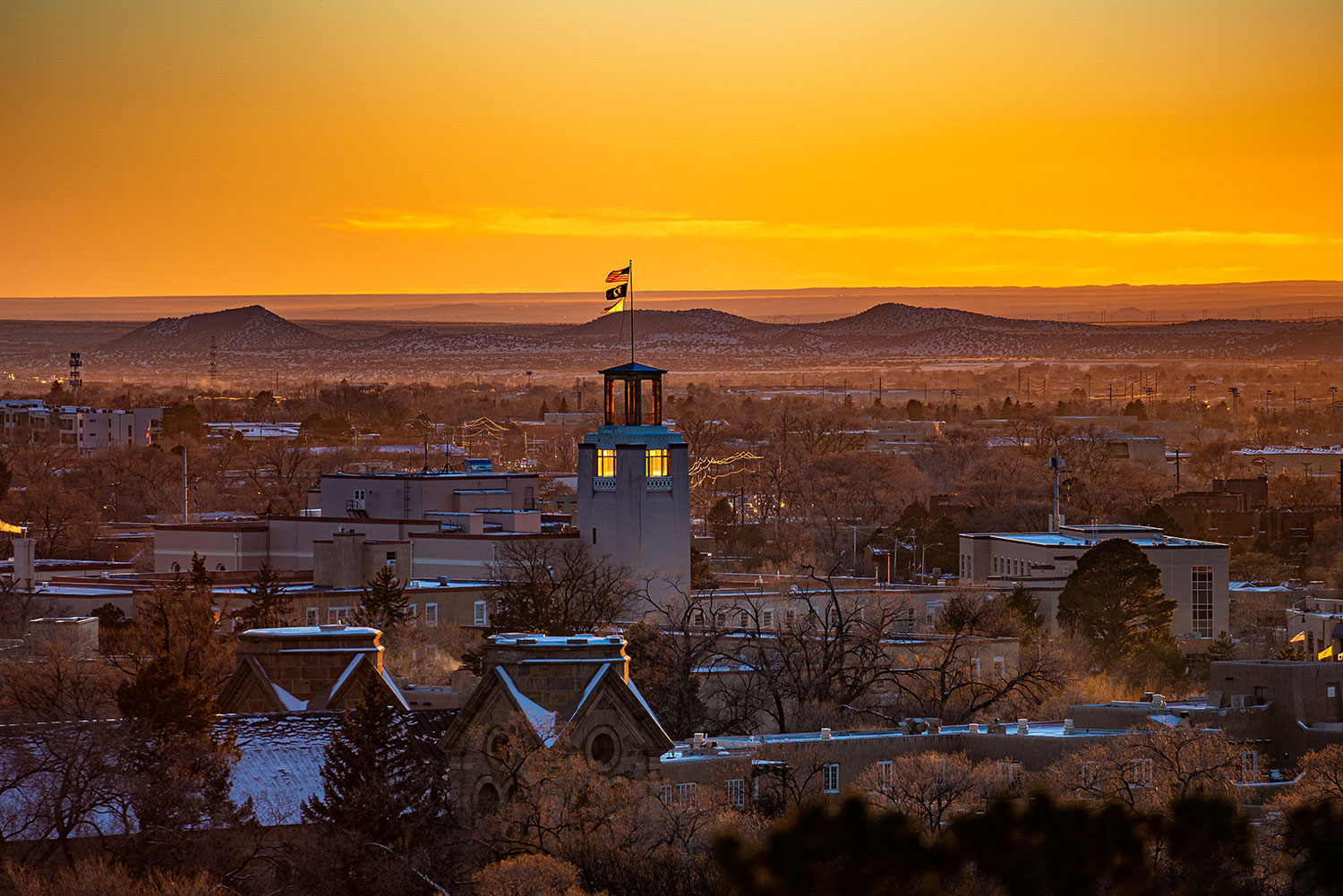 Santa Fe. What can we say that hasn’t been said by so many already? If you’ve moved here recently or plan to relocate, we’re glad to welcome you! We’ve designed this guide especially for the new resident. This chapter will cover Santa Fe basics from population to climate to how to get here.

According to U.S. Census Bureau population estimates for 2019, the City of Santa Fe clocks in with a population of 84,612 people.

From a Santa Fe real estate perspective, in 2017 Santa Fe had about 41,400 total housing units. About 57 percent were single-family detached homes. About 40 percent of the housing stock was built since 1999.

On average, New Mexico has a long summer and a long winter. It’s not unusual to see the last day of snow in May, followed by highs in the 70s throughout the next week. Temperatures stay fairly warm well into the fall, before it immediately starts snowing again.

Temperature highs and lows are generally quite livable. It’s rare to see temperatures dip below zero in Santa Fe, with winter averages staying around 20 and average highs in the summer peaking around 85. It gets very hot, but not Florida hot; and it gets very cold, but not North Dakota cold.

The seasons are easy enough to adjust to. You might be fine with a space heater in December and a window A/C unit in July. The trouble many people have when arriving in New Mexico is not the weather, but the altitude. The city sits 7,199 feet above sea level, ranking as the highest state capital in the country.

The best way to deal with altitude sickness: Make sure you have a few days to relax when you arrive. Don’t try to keep up the same pace you were going at in California or New York. Let your body take time to get adjusted.

Most importantly: It’s very dry here, so stay hydrated, and try to avoid stimulants like coffee and alcohol.

Santa Fe’s earliest settlers were Native Americans. The area was once home to Tanoan Pueblo villages along the Rio Grande, with the earliest settlements dating back to sometime around the turn of the 10th century.

The historic Santa Fe Plaza is the site of the Ogapoge Pueblo, built by the people of the Tewa nation around 900 AD. The Santa Fe River served as an effective source for water and fast transport for the area’s early inhabitants.

Spanish colonists were the next to arrive. In 1598, most of present-day New Mexico was part of the vast colonial empire called New Spain. The centerpiece of the Plaza became the Palace of the Governors. Built by the Spanish in 1610, the adobe structure is the oldest continually occupied public building in the United States.

New Mexico is a place that has adapted to new technology and changes in culture and society without abandoning what came before. The Palace of the Governors stands as a testament to Santa Fe’s unique timelessness.

The first U.S. city to be designated as a Creative City by UNESCO, Santa Fe’s reputation as an artist’s haven goes back to a railroad that never came to fruition. When planners instead went with Lamy, a town to the south of Santa Fe, the city had to explore other options to attract new residents. In the early 1900s, archaeologist Edgar Lee Hewett spearheaded an effort to create resources for archaeology and the arts, including the School of American Research. Before long, the city was drawing writers and artists from across the country, and has retained its reputation ever since as the creative capital of the Southwest.

How to Get Here

If you’re flying from the East Coast, be prepared for a long trip. If you’re coming from New York or Florida, you’re probably looking at a couple hours to get to the Dallas/Fort Worth airport in Texas, and a couple more to get from Texas to Santa Fe, assuming you don’t need to stop in Albuquerque for any reason. You may be looking at a stop in DFW even if you’re coming in from Colorado.

Getting here from other places in the Southwest or even the West Coast is a little easier. Flying in from Nevada or even LAX will take you less time than you’ve spent on grocery shopping trips in the past.